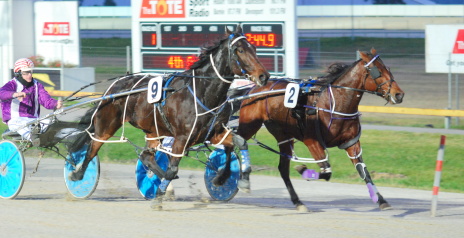 WELL bred four-year-old pacer Dieberdon made a winning return to racing at Tattersall’s Park in Hobart on Sunday night.

Dieberdon produced a herculean effort to run down the leader Inchbyinch in the home straight and score by a narrow margin with Glenfern Cruiser a closing third.

It was the gelding’s first start since finishing near last in the New Norfolk Cup at Kensington Park on Australia Day.

His first-up effort was full or merit as he began only fairly from the standing start and back mark of 20 metres, while the runner-up led and logged pedestrian quarters of 35 seconds for the first half mile (800m).

Inchbyinch kicked well clear on the home turn but under strong driving from James Austin Dieberdon eventually hauled him in and poked his nose out right on the line to secure victory.

Dieberdon (Dieberspace-Madonnas Mentor) is trained by Kevin Denny who missed the meeting as he is holidaying in Queensland but his daughter Joanne Denny was a capable caretaker.