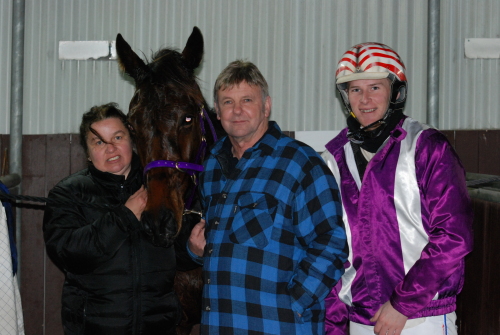 PROMINENT standardbred owner John Reid was in the process of buying a Dieberspace filly when another of the sire’s progeny came on the market at the same time.

He endeavoured to coax trainer friend Kevin Denny into buying either one and whichever one was left Reid would buy.

Denny wasn’t thrilled with the idea so in the end they decided to buy both the colt and filly for only $6000 with the intent of racing them in partnership.

Reid and his wife Cecilia and the trainer’s daughter Joanne formed the racing partnership with Kevin Denny given the responsibility of training the pair.

At Tattersall’s Park in Hobart on Monday night the colt, that has since been made a gelded, delivered the goods on debut for what could be the start of a very profitable journey.

With talented reinsman James Austin in the sulky, Dieberparty faced the breeze for the duration of the race but proved too strong for race leader Iden Princess over the closing stages of the M J Bennett 2YO Pace (1609m).

The gelding’s mile rate of 2.06.4 was far from impressive but it was the way the gelding went about his business under extenuating circumstances that added credence to the win.

“He went around tonight with only one hopple shortener releasing which meant he had to work around the bends in crab-like fashion and that’s not easy, especially for a young horse having his first race start,” Reid said.

Dieberparty was expected to start racing late last year but he fell victim to a couple of viruses that rampaged through Denny’s stable.

“The horse has been to the trials and won twice but each time we had him ready to race he got sick so we had to put him out and start again and this is about his fifth preparation,” Reid said

Listen to what owner John Reid had to say about Dieberparty’s debut win – click here.