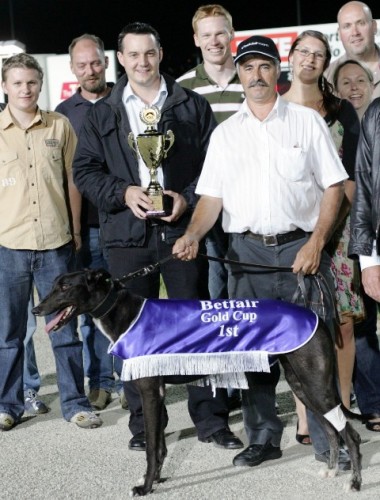 DISINTERGRATE tuned up for the Group 1 Hobart Thousand heats in a fortnight with another brilliant win at Tattersall’s Park last night.

The NSW dog made his Tasmanian debut a week earlier in a heat of the Betfair Tasmanian Gold Cup (461m) and made his opposition look ordinary as he strolled to a convincing win.

Last night he repeated the dose and while not as quick early from box seven, he still had enough grunt in his motor to find the front at the top turn and then demoralised his rivals.

The Charlie Gatt-trained dog clocked 25.97 in his heat and he mirrored that time last night.

His trainer Charlie Gatt says the Hobart Thousand has always been his main mission but winning the Gold Cup was a “nice bonus”.

“We thought we’d come down early and run him in the Gold Cup just to see how he handled the track and the travelling and I’m pleased to say he’s handled both really well,” Gatt said.

“He is a very good dog and since I’ve had him he’s never been beaten when he’s found the front.”

Disintergrate (Collision-With Integrity) began with them last Thursday night but with so much pace inside him from Eagle Eye (1), Akka Boy (5) and the speedy Fisherman, he was forced to track wide to the top turn.

But nearing the home turn Gatt’s kennel star slipped into overdrive and put two lengths on them as he wheeled for home.

From there on in it was a procession and he hit the line with over four lengths to spare from Stylish Monty with Eagle Eye just over two lengths away third and just in advance of Fisherman.

“We know there are some really good dogs coming for this year’s Thousand but my dog has the advantage of having had two good wins on the track and he has improvement in him,” the trainer said.

Gatt has been training for a long time and while he is yet to taste Group 1 glory he has prepared some handy dogs including Rumpus Brandi that won over a dozen at WentworthPark in the late 1980s and in more recent times the speedy Turbo Conquest also made it to top grade.

Gatt has been flying his dog in and out of Tasmania for the Gold Cup series and plans to do the same for the Hobart Thousand.

“I prefer to fly in on the day before his races and go home the next day and I’ll stick with that routine for the Hobart Thousand,” he said.

While Disintergrate was impressive, the local brigade lost no admirers and they are sure to be at their peak for the heats on December 10.