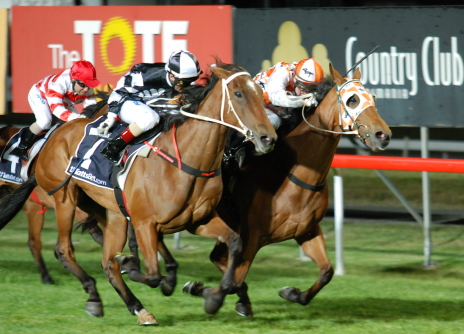 LONGFORD trainer Bill Ryan had another good day at the office in Launceston last Wednesday night ending the meeting with a double.

Ryan saddled up Sh’bourne Spirit (Kelvin Sanderson) to win the class one handicap over 1200 metres and Si Vite (Anthony Darmanin followed up in the last race of the day by winning the Benchmark 78 Handicap over 1600 metres, outgunning Craig Newitt’s mount Hell Strong.

Sh’bourne Spirit was resuming from a spell but made light of the task to lead throughout and hold a 1-1/2 length advantage over Digger’s Sunrise on the line with Deux Foix an eye-catching third at what was his first outing in five months.

Ryan said Sh’bourne Spirit showed a lot last preparation and to do what he did at his first outing under lights suggested he may have a very good season.

Si Vite had been racing consistently and looked the goods as he joined Hell Strong 200 metres from home and the pair engaged in a two-horse war to the line with Darmanin riding as vigorously as Newitt to get the desired result.

“I am very pleased with Si Vite because he showed a lot of courage tonight and that’s one of his biggest assets,” Ryan said.