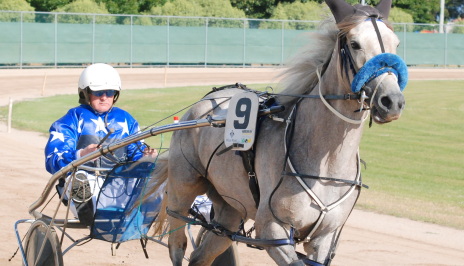 TRAINER-DRIVER Craig Hayes celebrated a memorable night in Launceston on Sunday by snaring a double.

But punters were far from impressed with one of his winners, Mister Tehaych, given he was sent out one of the rank outsiders at 66-1, while his other winner Matesforever was well supported at $3.10 as the second favourite.

Hayes had Mister Tehaych positioned behind the leader Dodgermemate and was always travelling well.

When the long odds-on favourite Our Sir Jeckyl produced his customary powerful finish in the straight he was being hailed the winner close to home.

But Hayes managed to force an inside run with his charge and Mister Tehaych hit the line with a head to spare over the favourite with Dodgermemate a short half-head astern.

Mister Tehaych was one of the state’s best two-year-olds and again shone at three but he was plagued with niggling injuries that prevented him from realizing his full potential.

Matesforever (Christian Cullen-Cosmic Ice) won with some authority making it a welcome return to the winner’s circle for the gelding that had not won since May last year.

He showed so much promise as a young horse winning his first two starts as a three-year-old before being injured and spent the next 18 months on the sidelines.

He won three of his next five starts but the wins dried up after he scored at Launceston in the Shane Yates Stakes over 2200m at the end of May last year.

Matesforever is trained at Scottsdale by Max Hadley for his son Rohan and a small group of part-owners.