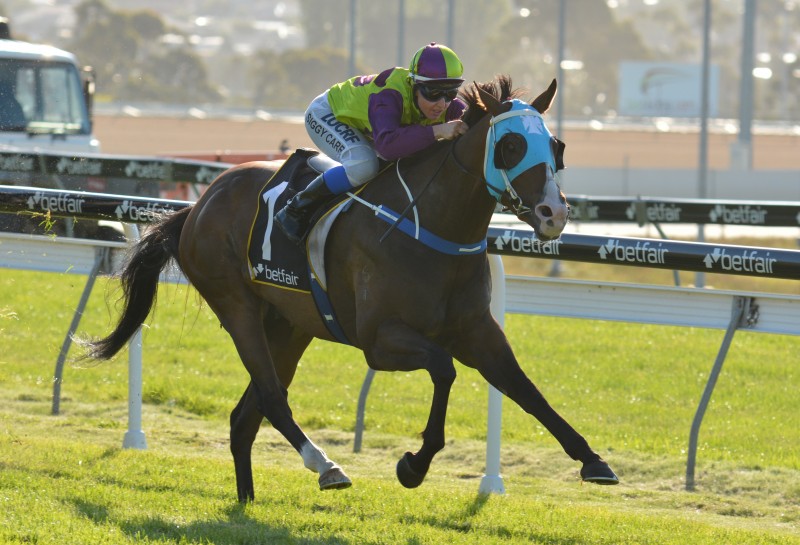 QUALITY three-year-old Geegees Doublejay delivered his best performance this preparation to score an emphatic victory in the prestigious $30,000 Carbine Club Plate over 1100 metres at Tattersall’s Park in Hobart yesterday.

With apprentice Siggy Carr in the saddle. the Stuart Gandy-trained gelding missed the start but was above to slide up along the rails and be third turning for home.

But in the home straight it looked for a fleeting moment that Geegees Doublejay would not get a run but when Lampo that had raced outside of the leader Miss Mars to the home turn drifted off the track slightly Carr took the chance and aimed her charge at the gap.

Geegees Doublejay burst through the gap and went on to score by almost three lengths from Miss Mars with Lampo hanging on for third ahead of Col’s Hero that enjoyed the run of the race on the back of Lampo.

Punters were delighted as he was backed in to start the $2.40 favourite and Gandy was thrilled with the win.

“I am so thrilled to win the race with this horse because he has been a bit unlucky this campaign,” Gandy said.

“I was a bit concerned near the home turn because I thought his bad luck was going to continue because it looked like he wasn’t going to get a run.”

“But Siggy kept cool and waited for the gap to come and when it did I thought my horse finished off really well,” he said.

Carr was equally impressed with the gelded son of Wordsmith’s efforts.

“He missed the start but made up ground quickly and turning for home I had so much horse under me I was just waiting and hoping for a gap to come,” Carr said.

“Once we got clear he just put them away. He’s a very good three-year-old,” she said.

Geegees Doublejay will have his next start in the $50,000 3YO Classic at Mowbray on Launceston Cup day (February 25).

It was the first leg of a feature race-winning double for prominent owner-breeders Paul and Elizabeth Geard as they also celebrated their second Tasmanian Derby win courtesy of outsider Geegees Classicboy leading all the way to win the $100,000 Listed event for three-year-olds.