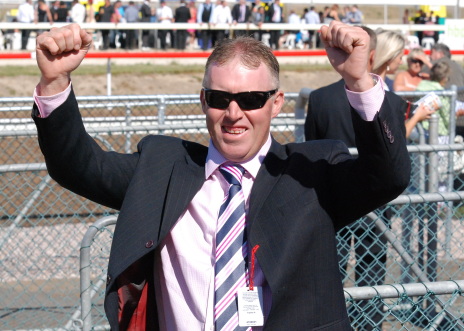 PROMISING stayer Dream Flyer delivered on the promise he showed last season by powering his way to an impressive win in the Simon Design Centre Devonport Cup over 1880 metres on the Tapeta Synthetic track at Spreyton today.

With the state’s premier rider Brendon McCoull aboard Dream Flyer overcame early trouble to get into the race at the right time and McCoull called on he gelded son of Savoire Vivre for the supreme effort in the home straight he delivered the goods.

The Troy Blacker-trained gelding went on to defeat the game Catwen Boy (Daniel Ganderton) by a length with the sole interstate runner Uchimura (Matthew Neilson) two lengths away third.

Dream Flyer won an open handicap over 1200 metres three starts prior and showed two starts later that he was a genuine Devonport Cup contender with a game second in the Sheffield Cup over 1650m on the Devonport circuit.

It was a big result for Blacker who joined an elite few who have trained back-to-back Devonport Cups.

While Blacker has always been hesitant to suggest Dream Flyer is following in is half-brother’s footsteps, after this latest win the trainer may be starting to rate that a possibility.

Catwen Boy was gallant in defeat as he fought it out all the way up the home straight but fell short when it counted to deny his popular trainer Mark Ganderton victory in his home town cup.

Uchimura battled on well after enjoying a cushy run in the race while he Gary White-trained outsider Mr Isaac ($40) worked home well from near last on he turn to just miss third place in a head-bobbing finish for the minor prize.

Listen to what trainer Troy Blacker had to say to Peter Staples about Dream Flyer’s Devonport Cup win – click here .