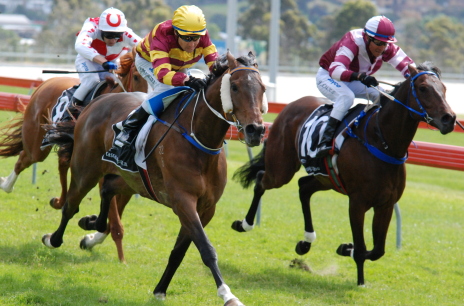 LONGFORD trainer Troy Blacker is hoping his Devonport Cup aspirant Dream Flyer can win the Shaw Contracting Sheffield Cup over 1650m at Tapeta Park Spreyton today to ensure he gains a start on the same track in the 2012 Devonport Cup on January 11.

If the gelding can win today’s race and gain a start in the Devonport Cup he will be trying to emulate the feat of his stablemate Dream Pedlar that won the race this year.

Dream Flyer scored an impressive win n Hobart two starts back but he struggled to match the class of his rivals in a weight-for-age feature race over 1400m at The TOTE Racing Centre in Launceston two weeks ago.

Blacker said this morning that Dream Flyer will go into today’s race at peak fitness.

“I couldn’t be happier with Dream Flyer going into this race today and if everything goes to plan he can win and get ballot-free entry into the Devonport Cup,” Blacker said.

“The horse is ready and I believe he is up to the class that is in today’s Sheffield Cup.”

“The Devonport Cup has been his main target this preparation so we are hoping he gets a chance to line up in that race,” he said.

Dream Flyer has only started 18 times for six wins and four minor placings for almost $75,000 in stakes.

The five-year-old is a half-brother to Blacker’s stable star Dream pedlar that was last season’s Tasmanian horse of the year as a result of winning multiple feature races in Tasmania and one interstate.

There is plenty of speed in race and that will suit Borugino from the Adam Trinder stable.

Borugino is heading to the Devonport Cup, a race he will be trying to win for the first time from three tries.

The nine-year-old gelding was second to Dream Pedlar last year’s Devonport Cup and he was fourth the year prior.

Trinder expects the gelding to be able to camp off the pace today and if that eventuates the gelded son of Perugino will be very hard to beat.

Other winning chances include top weight Success Dostta, Zellarcy, Pass Me By, Beven Heights and Catwen Boy in what is a very open race.

All races from Tapeta Park will be shown on Sky 2.