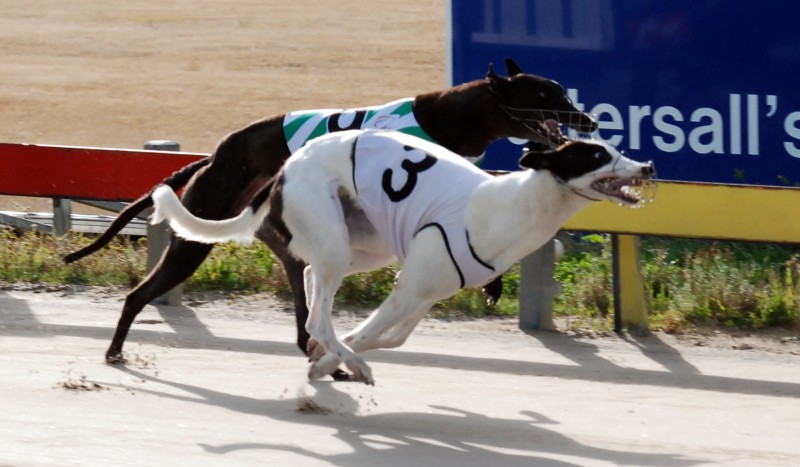 DREAM Miss could have a bright future following her impressive debut win in a juvenile over 461 metes at Tattersall’s Park in Hobart on Monday night.

The Ted Medhurst-trained bitch showed good manners by beginning well from box three and mustered enough speed to find the rail and lead the field to the top turn.

Dream Miss had two lengths to spare when she straightened for the long run home but despite starting to feel the pinch close to home she had almost a length to spare over Arnhem Warrior on the line with Brabham over two lengths away third.

Dream Miss is owned and raced by Debbie Cannan and Ian Sowell.

“I am very pleased with the way she raced on debut and you can never complain when they win,” Cannan said.

Dream Miss was bred by Gary Greig from whom Cannan purchased as a 12-week old pup.

“This bitch showed us a bit from very early on and she broke in well,” she said.

“She is an improving type and if anyone can improve them Ted (Medhurst) can,” she said.

Dream Miss produced good early sectionals but her run home was a bit below par.

“She has been pretty good in her first two sections but she can’t finish off as well as we would like but she will get there,” Cannan said.

Dream Miss stopped the clock at 26.65 which is nothing to write home about but she has the scope to improve on that time.

Cannan also is a talented trainer in her own right but many of her dogs are trained by Medhurst and vice versa.

“There are some dogs that are suited to bigger kennels and others that are more comfortable and perform better when they are trained out of a smaller kennel.”

“Ted and I train similarly and we do all the dogs together so it is a very good arrangement.” she said.

Cannan also has a handy ne arrival to her kennel n the form of smart bitch Parisette that won the Launceston Cup Consolation two weeks ago.

Parisette then won a grade three over 515 metres in 2989 in a near best of night performance on the Launceston circuit.

She finished down the track in the Damsel’s Dash (461m) in Hobart on Monday night but there were excuses as she was checked twice in the run.

“We will take things as they come with Parisette but we think she is fairly smart and we have our eye on taking her to WentworthPark and The Meadows for grade five races a bit further down the track,” Cannan said.

“We aren’t sure when we will go but I’m sure it will be sooner than later.”

Dream Miss is owned by Chris Nutt with whom Cannan has a strong working relationship.

Dream Miss began her career in NSW# but was sent to Cannan when the bitch’s form started to wane.

“It is probably fair to say this bitch’s form wasn’t very good when she first came to me.”

“But she had been racing against reasonably strong company from the outset and found that a bit too hard so when she came here to Tasmania she found the going a bit easier and that has lifted her confidence,” she said.