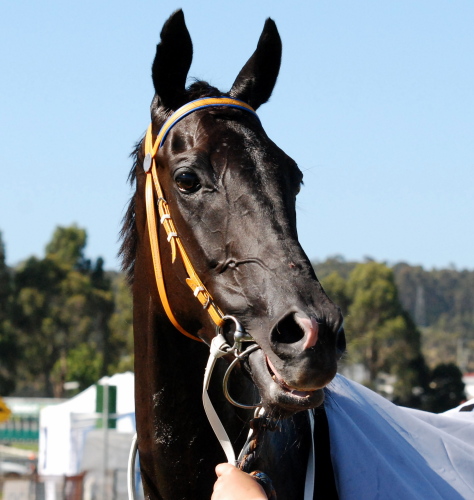 DREAM PEDLAR was heralded a superstar when the Troy Blacker-trained gelding set a weight carrying record to win the $100,000 Total Care Logistics Devonport Cup over 1800 metres at Spreyton Park today.

With heavyweight jockey Michael Guthrie aboard, Dream Pedlar lugged 61kg and with a one kilogram allowance for the jockey’s vest, the gelding carried 62kg to victory.

The most weight previously carried to victory in the race was nine stone 10 pounds (61kg) by Barnwell in 1949.

Dream Pedlar also had to overcome a wide barrier (10) but Guthrie showed his magic by having his charge slotted in on the rail and running fifth in a comfort zone after the field had travelled 600 metres.

There were a few anxious moments for connections when the race favourite appeared to be cluttered up and unable to gain clear racing room 500 metres out,

But Guthrie eased his charge off the fence without holding him up and when he asked him for the supreme effort in the home straight he responded magnificently.

Dream Pedlar ($3.60) drew alongside outsider Borugino ($31) 200 metres out and drew clear to go on and defeat that horse by a half-length with the unlucky Fierezza ($26) only a long head away third.

Blacker was quite emotional after the race, declaring Dream Pedlar the best horse he has trained.

Dream Pedlar is owned and raced by Dr Michael Mee and Dr Robert Nightingale who are two of Blacker’s long time stable clients.

There was some concern after the race when Blacker noticed that his stable star had been galloped on from behind.

The horse’s nearside hind leg had been stripped of skin about half-way up the leg but the trainer said he didn’t think it was serious.

Listen to what trainer Troy Blacker had to say about Dream Pedlar’s win – click here .