Drop in class helps Hillier’s 3YO 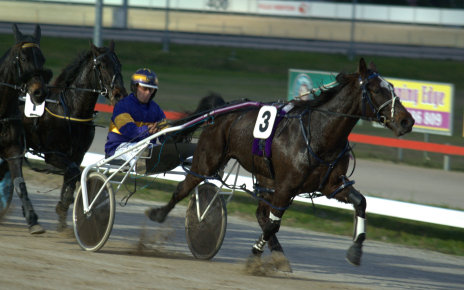 A DROP in class and a cool drive by trainer Rohan Hillier contributed to handy three-year-old Lilbitachickenfried scoring his fourth win of the season at Tattersall’s Park in Hobart tonight (Sunday.

Lilbitachickenfried had been racing against the best three-year-olds in the state but back against more modest opposition he gave nothing else a chance on his way to an impressive all-the-way win in the Bigpark.com.au Stakes over 2090 metres.

At his previous outing in Launceston the Elsu gelding finished well down the track after a torrid run behind Hugo Play in the $30,000 Globe Derby Stakes and that followed a midfield finish in a heat of the Globe Derby Stakes.

Hillier said Lilbitachickenfried had done a good job this preparation and he expects him to at least win a couple more.

Listen to what trainer-driver Rohan Hillier had to say about Lilbitachickenfried’s latest win – click here.