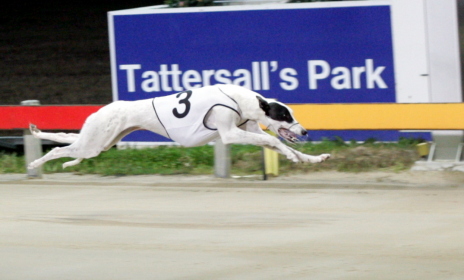 Both won their respective first round heats over 599 metres and they were equally as impressive in winning over the shorter trip of 461 metres last night.

The top eight point scorers from the two rounds of heats made it through to the final and Intense Suspense and Silent Giggle were the only ones to win both heats.

Each winner was awarded eleven points with eight for second and six for third, while fourth was allocated four points, reducing by one point through to seventh with no points for last place.

Silent Giggle could not have been more impressive in winning her 461m heat as she was only fairly away from box three but she mustered speed to be a length clear at the 340-metre boxes and extended her lead at every bend and went on to score by almost six lengths from Classic Camdale and Shanlyn Charlie.

The bitch has been in great form and trainer Loretta Luttrell was thrilled with this latest effort.

“She just tries so hard and that’s why she is so good,” Luttrell said.

“There’s no doubt she is right at the top of her game but she is going to have maintain that form if she is to win the final.”

“Everything could hinge on the box draw but if the gods are smiling on us in that department then she will be very hard to beat,” she said.

Intense Suspense has had only four starts in the state but his past two outings in the Medley series have shown him to be a serious chaser.

He won his first heat over 599 metres by seven lengths and clocked a serious time of 34.69 and last night he was just as impressive scoring by five lengths.

Intense Suspense, prepared at Brighton by Rod Ransley, showed his customary early brilliance to share the lead from box seven with Shafah Tiger (8) matching the son of Where’s Pedro to the home turn.

But when Intense Suspense got serious he left his rivals in his wake and cruised to the line a comfortable winner over Shafah Tiger with Trinity Lad over two lengths away third.

While Intense Suspense has shown good early speed, one of his biggest assets is his strength at the business end of his races, evidenced by his most recent win that saw him extend his lead with every stride over the concluding stages of the race.

Intense Suspense stopped the clock at 26.30 that was only fractionally slower that Silent Giggle that covered the 461-metre trip in 26.23.

Another impressive winner last night was Megastar Spargo from the Ian Callinan kennel.

Megastar Spargo flew the lids from box four and gave nothing else a chance on his way to an impressive 5-3/4 length win over Monahan Bully with Hayley’s Reward 1-1/2 lengths away third.

The Bombastic Shiraz-Miss Megastar dog was now won six and been placed 10 times from 27 starts but it has been his past handful of starts that have shunted him into the limelight,.

He was only run down in the last couple of strides by Silent Giggle in their first-round heart over 599 metres and there is no doubt his early brilliant, irrespective of what box he draws, will ensure he leads in this Thursday night’s final.

Shafah Tiger deserves his place in the final with a second in each of his heats and while the Leon Brazendale-trained dog will start at big odds he is definitely worthy of inclusion in trifecta and first-four bets.

The Anthony Bullock-trained Classic Camdale has been freshened for this series with his second last week full of merit and he would only have to take that form into the final to be a serious place chance at odds.

Shanlyn Charlie impressed in winning his first-round heat and he clinched a berth in the final with a handy third behind Silent Giggle over the 461-metre trip.

Shanlyn Charlie is better suited to the 599-metre journey and will be competitive in the final if he can avoid trouble early.

Wynburn Jet won his first round heat impressively but he only just scraped into the final with a fourth last week behind outsider Whitney’s Curse (Where’s Pedro-Chinatown Babe).

Three dogs finished on 14 points, Hellyeah Kristy, Rocket Tadmore and Monahan Bully, to signal a toss of the coin to determine the eighth runner in the final with the other two to fill the role of reserves.