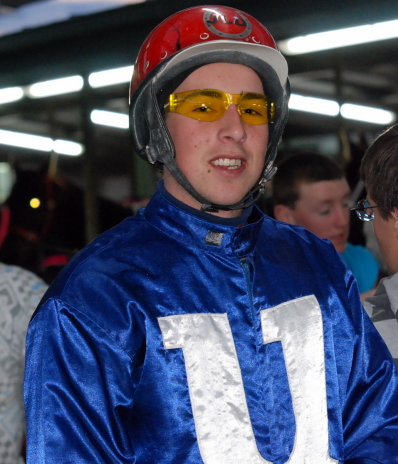 TEENAGE Tasmanian reinsman Josh Duggan picked up some pocket money whole visiting family and friends over the Christmas period when he drove a double at the Devonport meeting on Boxing Day night.

Duggan made it a race-to-race double for Bridport trainer Grant Hodges when he guided Enchanted Heart to victory in The Advocate Pace over 2297m then he joined up with George Grant to lead all the way in the feature race, the Gwen Williams Marathon over 2645 metres.

Duggan has been living in Victoria fort the past three years and working for top trainer-driver Chris Alford at his Bolinda training complex.

The two wins were a result of completely different driving tactics but the son of champion Tasmanian reinsman Ricky Duggan left no doubt that he has become an accomplished reinsmen.

His drive on Enchanted Heart was a pearler, allowing the five-year-old Blissfull gelding to settle near the rear of the field before coming with a well-timed run to grab victory in the shadows of the post over the favourite Matesforever ($2.70) and Brown Paige.

However George Grant’s win was one of courage and coupled with Duggan’s ability to rate the six-year-old well over the gruelling 2645-metre journey.

George Grant had three metres to spare on the line from stablemate Murillo Bromac with In Cruise Mode five metes astern.

Duggan is hoping to secure a couple of drives at the popular St Marys meeting on New Year’s Eve.