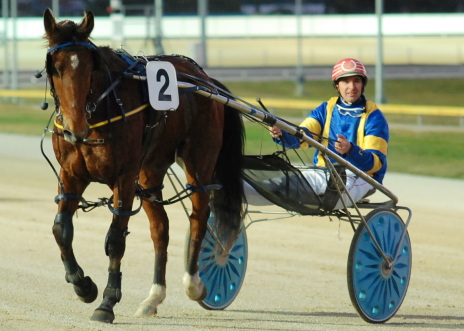 VOTING in the inaugural Halwes Medal looks set to produce a thrilling finish with only seven points separating the top four vote scorers with only nine meetings of the 2011-12 season remaining.

Top Hobart-based driver Ricky Duggan has amassed 38 points to lead by four from fellow reinsman Gareth Rattray with Bridport-based trainer-driver Grant Hodges close up on 32 and only one point ahead of Rohan Hillier.

The Halwes Medal is the brainchild of stalwart standardbred owner Jamie Cockshutt who has secured the support of the Breeders, Owners, Trainers and Reinspersons’ Association (BOTRA).

The Halwes Medal is awarded on a point-score basis with a panel of judges secured to vote throughout the season.

Each judge is allocated a meeting on which to vote and votes are awarded on a 3-2-1 basis.

Halwes was one of the best Tasmanian pacers to ever grace a racetrack.

His feats are well documented and he is widely regarded as the best Australian pacer not to have won an Inter Dominion.

He won each of three heats of the 1968 Inter Dominion in Auckland NZ only to be scratched from the final because of a slight hoof injury.

The inaugural Halwes Medal winner will be announced at the annual Harness Awards Night that will this year be held in Launceston in September.

Votes for the last nine meetings will not be revealed until the Harness Awards night on September 16.