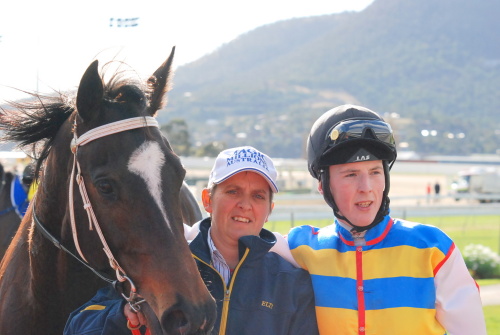 WELL bred four-year-old Elle Of Westerly (El Moxie-Point Cloates) made up for a luckless debut when she powered home to score an impressive win in the Paper Grass 3YO + Maiden over 1100 metres at Tattersall’s Park in Hobart last Sunday.

The Tammy Mollross-trained mare was well placed in the run by leading apprentice Ronan Keogh who had her settled fourth and always in a winning position.

Thirsty Merc led and looked to have the race in his keeping until Elle Of Westerly loomed alongside 200 metres from home.

Thirsty Merc fought back but Elle Of Westerly proved too strong at the business end to score by over a length from Thirsty Merc with Dancing Pegasus five lengths away third.

Elle Of Westerly put the writing on the wall with a luckless fourth on debut two weeks earlier on the Hobart circuit.

Listen to what apprentice Ronan Keogh had to say about Elle Of Westerly’s win – click here .