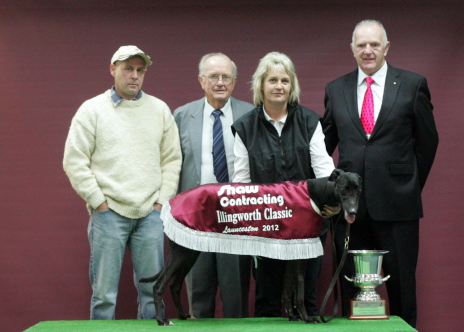 TALENTED bitch Emerald Lee confirmed her status as Tasmania’s best sprinting bitch when she powered her way to an emphatic win in the time honoured Illingworth Classic at The TOTE Racing Centre in Launceston on last night (Monday).

Emerald Lee began brilliantly from box three and after being challenged strongly down the back stretch extending she had the courage and determination to hold out all comers and extend her lead over the concluding stages.

The Debbie Cannan-trained bitch went on to defeat archrival Jethro by 2-1/2 lengths with New Recruit a half-length astern.

Emerald Lee won her heat by a narrow margin over Jethro that finished powerfully to be beaten just under a length but she was even more impressive in the final.

Emerald Lee won the LGRC Breeders Classic to confirm her standing as one of the state’s best pups but she has gone from strength to strength and looks set to dominate at al levels.

She has won nine from 13 starts and has been placed the other four occasions and with this latest winner’s cheque of $14,000 she has amassed almost $32,000 in stakes.

Cannan has reduced the number of dogs she has in her kennel these days but what she has is all class.

Emerald Lee (Paddy’s Flame-Inbetween Days) has managed to clock some outstanding times on the Launceston circuit.

She covered the 515 metres on Monday night in a slick 29.67 seconds but she stopped the clock at 29.58 in winning the Breeders Classic late last month.

She has an imposing record on the Launceston track of five wins and a second from six tries and she is almost as clever on the Hobart layout.

Emerald Lee doesn’t turn two until June so what she’s achieved in a short space of time as a pup is testament to her owners’ patience.

The bitch is owned and raced by her trainer in partnership with Ian Sowell.

While Emerald Lee continues to impress there is still plenty to like about a few that trailed her home on Monday night.

Jethro has done plenty of racing, compared to Emerald Lee, with his 25 starts producing a dozen wins and 10 minor placings.

If Jethro possessed Emerald Lee’s impeccable box manners and early brilliance he would be next to unbeatable.

New Recruit also is an extremely talented sprinter that could progress to middle distances if t connections so desire.

New Recruit, prepared at Brighton by Mick Stringer, has been in great form and was game in defeat at his latest outing.

His record of 15 wins and six minor placings from 28 starts speaks for itself.

The Ted Medhurst-trained Zavance Man was never in the hunt from box eight in the final but he is a Hobart Maiden Thousand winner going places with a record of eight wins from 12 starts and his litter brother and kennel mate Bell Haven also delivered.

Bell Haven has won eight and been placed four times from 17 starts and was just pipped for fourth on Monday night.