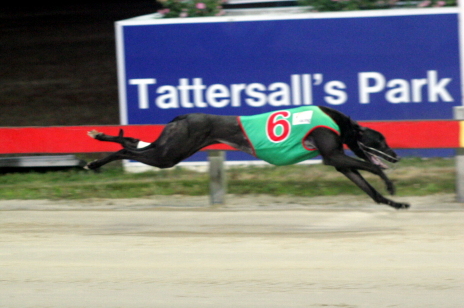 QUALITY Tasmanian greyhound Emerald Lee scored one of her best wins when she outgunned a top field to take out the Bob Brown memorial over 461 metres at Tattersall’s Park in Hobart last night.

Emerald Lee, prepared at Mangalore by Debbie Cannan, showed great speed to be handy to the lead from box six and once she gained the upper hand from Captain Cosmic she sped clear and went on to defeat the Darren McDonald-trained El Caballo by over two lengths with Jennifer Lee a similar margin away third.

The Bob Brown is the consolation of the Group 1 Hobart Thousand and this year’s field was as good as any to contest the race that is named in honour of one of Tasmania’s greatest greyhound trainers.

Emerald Lee is one of the state’s most consistent young bitches having now won 16 of her 24 starts in the state that includes an Illingworth Classic and a Tasmanian Oaks.

She was being aimed at the Hobart Thousand and Cannan had her primed to be at her peak for the big race but unfortunately she suffered sever interference in her heat and could do any better than finish third behind Custodian.

Cannan is likely to aim Emerald Lee at next month’s Devonport Cup and then head to the Launceston Cup.

McDonald said he was unlikely to have any runners in the Devonport and Launceston cups.