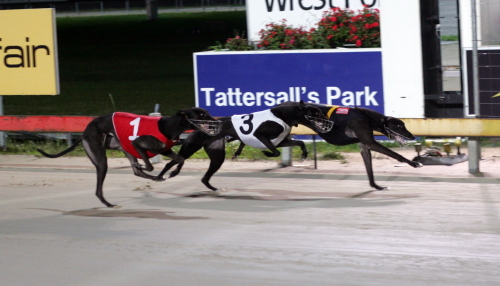 NEW South Wales trainer John Harris is no stranger to chasing Group 1 glory so it came as no surprise to see him in Hobart a month out from the Wrest Point Hobart Thousand series.

Harris took his kennel stars Emo Appeal and Frank Sannette to Tasmania with the hope of them making their way into the Thousand final.

Both dogs missed a place at their first attempts on the circuit on November 18 but last Thursday night Emo Appeal helped pay for some of the trip by winning a mixed grades 4-5 over 599 metres.

Emo Appeal raced outside of the leader Pepper Spice to the 340-metre boxed before finding the front.

He set up a three-length break at the top of the straight and had enough in reserve to hold out Pepper Spice that came again, with Capetown Jessie a fast-finishing third.

Frank Sannette is likely to have his next start this week to have him sharp for his Hobart Thousand heat.