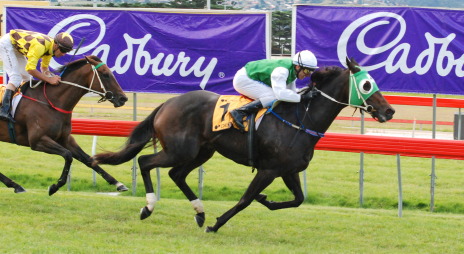 THE reigning premiership training partnership of David and Scott Brunton reinforced their dominance on Tasmania racing at Tattersall’s Park yesterday when they quinellaed arguably the best thoroughbred race in Australia the Listed $150,000 Tasbreeders Bow Mistress Trophy over 1200 metres.

Lady Lynette outgunned her stablemate I’m A Hussy to give her trainer David Brunton one of the biggest thrills of his career.

Brunton had longed to win the Bow Mistress, a race he believes is one of the most valuable on the Tasmanian racing calendar.

It was Derby Day but the Bow Mistress overshadowed the presumed main event, simply because the horseflesh that lined up in the weight-for-age race for fillies and mares boasted some of the best sprinting mares in the nation.

Dave Brunton praised his “Lynnie” for her courage and ability to overcome niggling problems that would most likely prevent any normal horse from reaching such lofty heights.

Lady Lynette earned star status in Tasmania before making her mark on the national scene winning Group and Listed races and holding her own at Group 1 level.

This latest win took her career stake earnings to almost $700,000.

“She’s an absolute ripper of a horse and I love this mare,” Brunton said as he revealed the tender side of the character who has earned a reputation as a tough nut.

I’m A Hussy showed her customary speed to lead the star-studded field to the home turn and when she put two lengths on her rivals at the top of the home straight that mare’s connections had one hand on the winner’s trophy.

But when premier rider Brendon McCoull called on Lady Lynette to deliver the goods she unleashed a powerful sprint and put the end result beyond doubt within the blink of an eye.