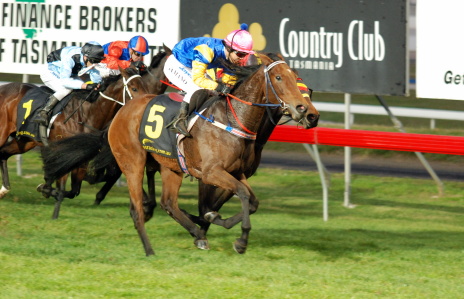 Evans prepared Pittenweem (Dash For Cash-Compactus) to win the $50,000 Launceston Mitsubishi 2YO Tasmanian Sires Produce Stakes over 1400 metres at The TOTE Racing Centre in Launceston on Thursday night.

Pittenweem won her maiden on debut at the TOTE Racing Centre in early December last year followed by a game second at her first try on the Hobart circuit but she was unplaced at her three subsequent outings.

Evans said he set the filly for the race and he found it hard to contain his emotions after underrated Japanese rider Shuji Amana partnered the filly to victory.

“I bought this filly at the William Inglis Melbourne Autumn Yearling Sale because she was related to Winter Guest that I owned and trained to win 15 races,” Evans said.

“He was a marvelous horse to me and my family because every time we were doing it tough he’d poke his nose out on the line to win a race and that kept us going.”

“I went to Melbourne specifically to look at this filly and when I saw her I had to have her but I only paid a measly $5000,” he said.

Pittenweem was ridden superbly by Amano who allowed her to race in her comfort zone near the rear of the field but he made sure she was in touch with the leading group by the time they reached the home turn.

The race favourite Crown Consul ($2.60fav) hit the front in the home straight and looked set to run away from her rivals until Pittenweem arrived on the scene to stake her claim.

Pittenweem ($5.90) proved too strong in the end to score by long neck from Crown Consul with Ready To Pounce ($4.20) toughing it out in third spot 1-1/2 lengths astern.

Evans named the filly in honour of his former smart galloper Winter Guest after searching the web.

“I did a Google search on the computer and found Pittenweem was a small town in Scotland where they filmed a movie called A Winter Guest,” Evans said.

Listen to what trainer Terry Evans had to say about Pittenweem’s Sires Produce win – click here .