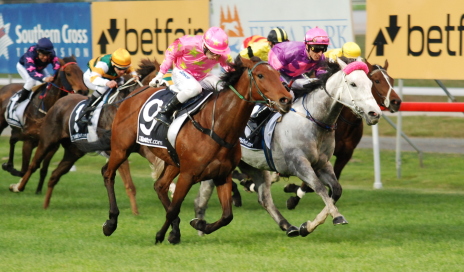 SPREYTON hobby trainer Darren Kenny is clearly someone who wears his heart on his sleeve given the emotion he showed after his five-year-old gelding Tree Bandit scored an impressive win in a benchmark 62 race over 1400 metres under lights in Launceston on Wednesday night.

Tree Bandit (Anthony Darmanin) came from last on the home turn to score a narrow but game win over Fashion Label and race leader Memo.

“This horse is fantastic because he just tries so hard,” Kenny said.

“It’s just amazing what this horse does for me because I’ve had three goes at training him and he just keeps on delivering for me,” he said.

Kenny is a baker by profession but he also is a talented horse trainer, with a 2009 Devonport Cup win by Pindari Prince to prove it.

That too was an emotional day for Kenny but similar to last Wednesday night.

Kenny, who owns Tree Bandit, stopped training for a while and sent the gelding to another stable but the horse never performed like he did when in the care of his owner.

But back in Kenny’s care he has regained the form that had some scribes predicting a bright future for the gelding.

Kenny also own\s and trains one of last season’s more talented two-year-olds Kenjorwood that has been back in work for about three months and is due to resume racing in a fortnight.