Emotional win by Hill’s 3YO 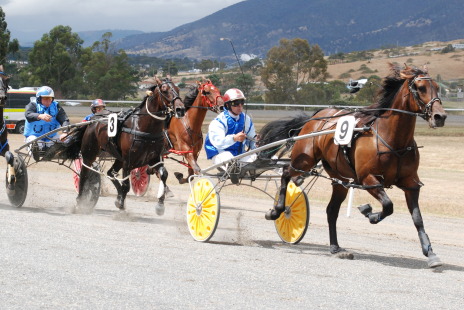 Tasmanian harness racing mentor Paul Hill spent about two years on the sidelines through a swab misdemeanour but the likeable horseman has bounced back from the setback with a positive outlook on his training enterprise.

And at New Norfolk on Australia Day he prepared a Cesta La Vie to win the Phil Garwood Memorial Pace over 1700 metres on the Kensington Park circuit.

Cesta La Vie (French Babe-Time Moves On) enjoyed a cushy run in the one-out-one-back position thanks to a superb piece of reinsmanship from Ricky Duggan.

When Duggan eased the three-year-old and called on him for the big effort he cruised to the leaders and went on to score by almost five metres from Mister Boswell with Flash Johnny over a metres astern and three metres clear of race leader Across The Sea.

The race was named in honour of the late Phil Garwood who was regarded as one of the most hard-working and devoted stalwarts of harness racing in the Derwent Valley region and with whom Hill shared a great friendship.

“To win ka race named in honour of Phil (Garwood) is absolutely brilliant because he was a great bloke and someone who I called a friend,” Hill said.

Cesta La Vie won a two-year-old maiden on debut in May last year and was placed twice from five subsequent outings last season.

He resumed with a win at St Marys on New Year Eve and went onto this latest assignment on the back of a luckless third in Hobart behind Aninchofhislife.

Hill predicts a bright future for the gelded son of French Babe.