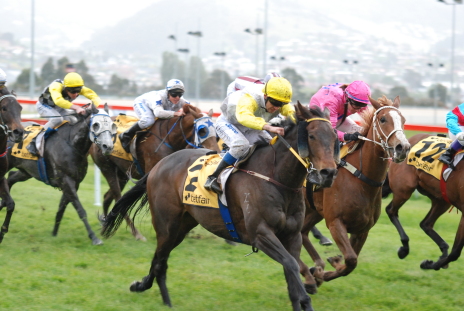 TRAINER Mark Everett took a small team of three to Tattersall’s Park this afternoon and emerged with two winners.

Faster Than Cows led all the way to take out the James Boag 3YO & Upward Maiden over 1400 metres and Everett’s highly promising six-year-old Rome Burns produced the run of the day to win the Segretto Class One Handicap over 1200 metres.

Faster Than Cows was having her second start this preparation and was coming off a first-up seventh behind the highly promising Bag Of Monkeys.

With Anthony Darmanin aboard the four-year-old chestnut gelding showed good early speed to lead and despite being headed in the home straight she dug deep and emerged triumphant by a long neck from the favourite Willow The Wisp with Not Guilty a closing third.

But clearly the most impressive win on the day was that of Rome Burns that settled last but was three lengths off the second-last horse nearing the homer turn.

In-form apprentice Bulent Muhcu took Rome Burns to the outside fence and the lightly-raced six-year-old gelding unleashed a powerful finish that saw him overhaul the leaders close to home and score running away from Lago Girl with race leader Suwerte clinging to third.

His other runner Hold Onto Your Hat had no luck in her race. She was held up at a crucial stage and was unable to get a clear run in the home straight.

Listen to what trainer Mark Everett had to say about the small team he took to Tattersall’s Park – click here .