Exclusive One has eye on big prize 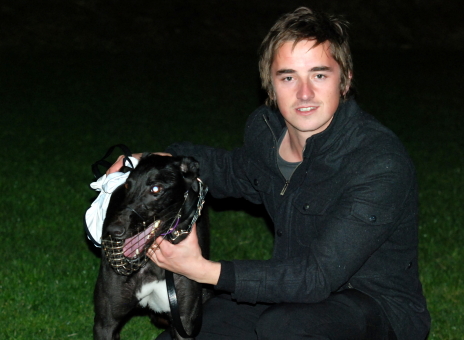 BOOM New South Wales dog Exclusive One emerged as the likely favourite for this Saturday night’s National Sprint Championship after drawing ideally in box eight for the Group 1 event over 461 metres.

Exclusive One won his way into the race by easily winning his state heat at Bulli over 472 metres.

It was s smart move by Greyhound Racing NSW to run their state finals at Bulli as it is a U-turn track similar to Hobart.

The David Righetti-trained dog is one of the rising stars in NSW and given his impeccable form at Bulli which stands at six wins from as many outings, he would only need to have a trouble-free trip across Bass Strait to be a major contender for the National Sprint title.

With those times converted Exclusive One has the potential top clock a sub 25.50 time with clear running.

The in-form Victorian Fabregas trialled solo on the Hobart track last Thursday night and he was impressive clocking 25.90, which pleased his trainer David Hurst.

“The dog lost a little bit of weight travelling over but it was his first time away from home so that was to be expected,” Hurst said.

“I am rapt with his time for first look at the track especially given that it’s a very long and taxing home straight.”

“I’ll take him back home and we’ll come back the day before the race and that will give him enough time to recover from the plane trip next time,” he said.

Fabregas appeared to be dehydrated after his solo trial but Hurst was not concerned.

Queenslander Glen Gallon trialled on the Hobart track early last week and produced a time of 26.06 with splits of 5.24 and 11.34.

It was a handy trial but the proven Group 1 performer can no doubt improve on that time on race night.

The Tony Brett-trained dog had to earn his crack at the National title by chasing down the in-form Knocka Down and win by the narrowest of margins.

It was Glen Gallon’s 21st win from only 39 starts but if his winning record is to be extended the dog will have to overcome his awkward draw in box five.

South Australia’s representative Aston Thomas earned his berth with an effortless win in his state final.

The Ray Murray-trained dog flew the lids from box three and gave his rivals a galloping lesson, clocking a slick 29.89 for the 515-metre trip.

Aston Thomas is usually a very reliable beginner but after winning his state final he finished well down the track at Angle Park last Monday week.

A subsequent vet’s inspection revealed the dog had been injured and he was stood down from racing for 10 days.

WA representative Uno Reltub did it easy to win his state final and the son of Primo Uno has drawn well in box two.

He has won 11 of 13 starts at Mandurah which also is a one bend circuit.

The other entry from NSW Oaks Road is a classy sprinter and warrants his place in the field as a wild card entry.

From box four he will need to begin well and be in the first couple at the to turn if he is to be a contender at the business end of proceedings.

Tasmania’s representatives Rob Pines and New Recruit will start from boxes six and one respectively but both have drawn poorly.

New Recruit is best suited out wide so the inside alley is of no real advantage to him unless he can defy past efforts from that alley.

Rob Pines won the state final from box one and that was the key to him making it into the National Championship.

But the dog is very well performed winning a Group 3 over 520m at Ipswich in April starting from box five.

New Recruit has an exceptional record on the Hobart track winning 17 from 35 over the 461 metres.