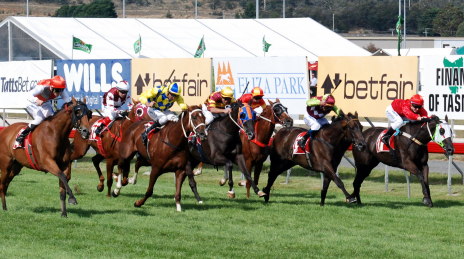 It was mission accomplished for the connections of Fast Future (Generous-Quip) who mapped out a plan to send the horse to Tasmania three months ago courtesy of a push from the horse’s part-owner Kerry Good who was a star footballer for Ulverstone before moving to Victoria to further his career with VFL/AFL club North Melbourne.

The race was run at a solid pace with home-town favourite Dream Pedlar sent out the most favoured of the local brigade while AAMI Hobart Cup winner Bid Spotter was the popular elect.

Dream Pedlar loomed to win on the home turn but his previous hectic racing schedule proved too great an impost and he tired to finish a creditable fifth.

However, Bid Spotter settled worse than midfield and failed to flatter in the run to the line to finish a disappointing 14th in the field of 16.

There were some hard luck stories from the riders of other fancied runners but none more so than that of the Darren Weir-trained Streaky Fella that almost fell about 200 metres from home when attempting to take a run that closed. He still finished sixth and no doubt should have finished a lot closer to the winner.

Listen to what trainer Russell Cameron had to say about his Launceston Cup triumph – click here.