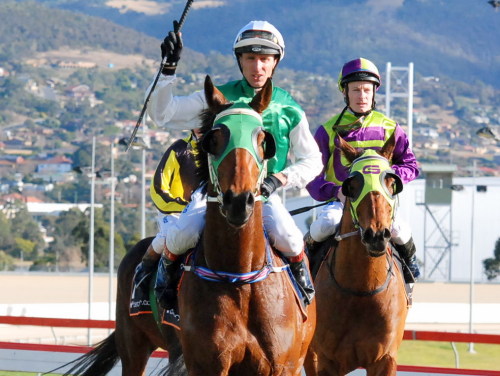 THE training partnership of David and Scott Brunton emerged as a powerhouse this season and in Hobart today the juggernaut continued with an all familiar four-win haul to take team Brunton’s season tally to 76 and to a state record.

With two meetings remaining in the 2009-2010 season team Brunton could surpass 80 winners but whatever they end up with it will be a record with today’s haul surpassing the late Allan Stubbs’record of 73 that he set during the 1990-91 season.

Highly promising stayer Fierezza presented the Bruntons with their first winner on the 10-event card.

Fierezza made it four wins in succession from his only five starts this preparation but this was clearly his best effort.

The gelded son of Blevic was tackling 2100 metres for the first time, stepping up from 1600 metres of his previous outing at the same venue.

“It’s hard for any horse to win four in a row but it takes a very good one to win at their first attempt over 2100 metres,” said co-trainer Scott Brunton.

Fierezza opened his winning account over 1100m on May 30 and followed up two weeks later with victory over 1400m. He then backed up a fortnight later to win over 1600m again on the Tattersall’s Park circuit.

He hit the line with only a half-length to spare over Himstedt but at his three previous outings his average winning margin was about three lengths.

Brunton said he was unsure about the gelding’s immediate future.

“I’m leaning towards a spell but we have a 1600-metre 0-75 coming up and there is the possibility of taking him to Melbourne for a run but we’ll assess how he’s come through this run and make a decision on what we’re doing with him later in the week,” Brunton said.

Team Brunton’s other winners were Announced in the maiden/class one over 1600m, Emerald Vale in the class one over 1200m and Cool Heat in the last race on the card, the Ladies in Racing Handicap (C4) over 1100m.