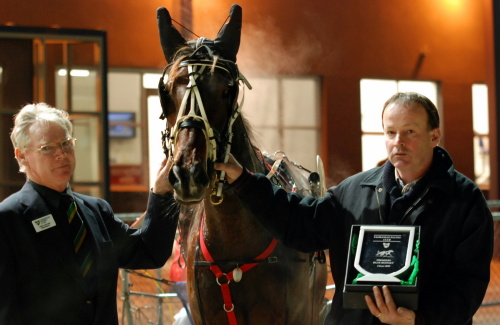 HARNESS trainer Bill Dornauf has always believed his two-year-old filly Klebnikova Leis was special but until last Sunday night she had failed to live up to those expectations on the racetrack.

Klebnikova Leis delivered a knockout blow to punters when she faced the breeze outside of the long odds-on favourite Benediction in the $10,000 Premier’s Blue Bonnet Stakes but made light of the task to score impressively.

The filly hit the line well clear of Benediction with Kristins Niadh a closing third.

Dornauf said Klebnikova Leis had been disappointing “given I have never had a horse work better on the track in all my years of training.”

The filly is owned by her breeders Trevor and Marjorie Leis who have enjoyed much success over the years.

The filly was driven by talented young reinsman Nathan Ford who won both feature two-year-old races on the card. He also guided first starter Winewomenandsong to victory in the $10,000 Tasmanian Premier’s Breeders Plate.