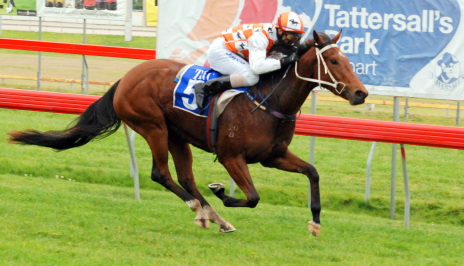 SMART two-year-old filly Buzzing Along stamped herself as one of the state’s most promising juveniles when she scored an effortless win in the $40,000 Betfair 2YO Plate over 1100 metres at Tattersall’s Park Elwick yesterday.

With the state’s leading rider Brendon McCoull aboard, Buzzing Along produced a powerful finish to score by three lengths from Ready To Pounce with race leader Serlait a half-length astern and just in advance of the fast-finishing Committo.

Buzzing Along is trained by David and Scott Brunton atSevenMileBeachwhere she produced a winning track gallop leading up to the race.

David Brunton said Buzzing Along (Tough Speed-Almighty Buzz) had shown above average ability from day one and he was not surprised by the ease with which she won.

“This filly has come along nicely and what she did at her first two starts in good company suggested she was a fair horse in the making,” Brunton said.

The trainer gave only $7000 for the filly at the 2010 Tasmanian Magic Million Yearling Sale.

“I reckon she is probably the bargain buy of the season,” he said.

The race was run at a solids tempo with the Gary White-trained Searlait (Remi Tremsal) making play in front to the home turn.

Searlait kicked two lengths clear at the top of the straight but when McCoull called on Buzzing Along for the supreme effort she responded magnificently and hauled in the leader with consummate ease.

Brunton set Buzzing Along for the race and hopes she go on and be competitive in the remaining two juvenile features on the calendar, the 2YO Autumn Classic (1200m) in Hobart in a fortnight and the Sires Produce Stakes over 1400m in Launceston on May 26.

“If she stays sound and there are no problems in the next few weeks she’ll contest the final two feature two-year-old races and then she’ll go for a decent spell,” Brunton said.

Team Brunton won three of the first six races on the nine-event card yesterday to take them further ahead in the race for the trainer’s premiership.

Their other winners were Phizup in the Benchmark 68 Handicap over 2100 metres and Punctuate won the $20,000 Tattersall’s Park 3YO Plate over 1100m, leading all the way for what was a very impressive performance.