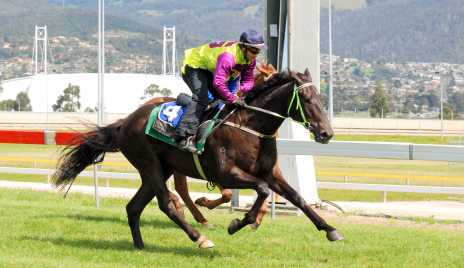 There are 16 youngsters nominated for the Debutant Maiden Plate over 900 metres and two of the nominees from Luttrell’s stable scored impressive trial wins at Elwick yesterday.

Both juveniles were ridden by in-form jockey David Pires and they are owned and raced by the state’s leading owners Paul and Elizabeth Geard.

Luttrell confirmed both would run on Sunday provided they ate up and had taken no physical harm from the trial.

“Gee Gees Prairie pulled up super and I would expect her to definitely go around on Sunday and Gee Gee Black Fury also pulled up well but I won’t make my mind up for sure until I see how they are tomorrow,” Luttrell said after the trials.

It has been a long time since the first two-year-old race in Tasmania has boasted more than a handful of nominations.

Early two-year-old races are notorious for falling away quickly in numbers but from all reports there is a definite air of confidence about juvenile racing this season from all regions of the state.

Of the 16 nominated for Sunday’s race six are owned by the Geards, including three from the first crop of their resident stallion Wordsmith.

Geegees Soprano (Wordsmith-Opera Star) trialed well behind Gee Gee Black Fury and did enough to suggest he will be competitive if trainer Stuart Gandy opts to accept.

Another youngster to trial well was the Terry Evans-trained filly Miss Elsa that while finishing last of three and over five lengths from the winner, Gee Gees Prairie, she did everything right and was not pushed out over the final 200 metres.