First two-year-olds step out in trial 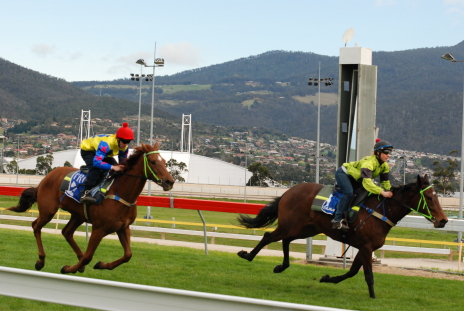 CAMPANIA trainer Rhonda Hall presented the first two-year-olds to trial at Tattersall’s Park in Hobart on Tuesday and they did enough to suggest they will both be competitive.

Gold Account, a filly by Break The Vault from the Umatilla mare No Fear and Dubawi Diamond, a flashy chestnut filly by Dubawi from Tarho galloped over 800 metres with Gold Account emerging triumphant by just over a length.

Good Account stopped the clock at 52.53 seconds with wasn’t a bad effort given the windy conditions and that neither juvenile was pushed right out to the line.

Gold Account was issues her barrier ticket by stewards but because Dubawi Diamond missed the start by three lengths owing to the rider Bulent Muchu holding her back at the start, she will have to trial again to get her ticket before being allowed to race.

Hall was thrilled with both fillies and suggested they might both line up in the first two-year-old race of the season at Tattersall’s Park on November 4.