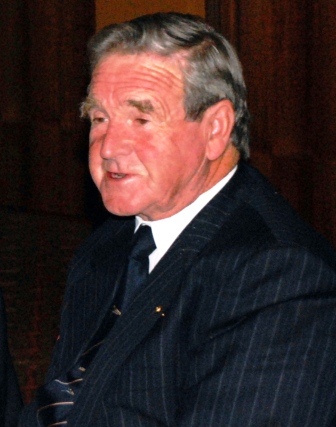 Harness racing stalwart Roy (Tem) Fish was last night honoured for his service to the industry by being named the 2009 recipient of the Edgar Tatlow Medal.

The Tatlow commemorates the major influence of the Tasmanian pioneer breeding legend Edgar Tatlow, whose stallions and their progeny have dominated Australasian Harness Racing since the 1930’s.

Fish (80) was born into a harness racing family and has been actively involved in the industry for 68 years.

When he was 18, his father gave him Our Dillon to train and it won a race shortly afterwards. Unfortunately his father died a year later and Tem sold Our Dillon to Rupert Peck, who won a further 16 races with the gelding.

He sold another horse, Our Secret, to Harry Heazlewood who was just starting out as a trainer. Harry won many races with Our Secret and eventually achieved notoriety as the trainer of the great Golden Alley.

Since then Fish has bred and raced many horses with the best being Premier Dillon, a winner of 30 races, Belmont Dillon and Dame Fontaine. He is still breeding and racing.

He has been involved in racing administration for the majority of the last 55 years. He joined the committee of the Oatlands Hack and Trotting Club in 1948 and was President for 20 years from 1951.

He also tried his hand at race calling at now defunct tracks such as Bothwell, Hamilton and Richmond.