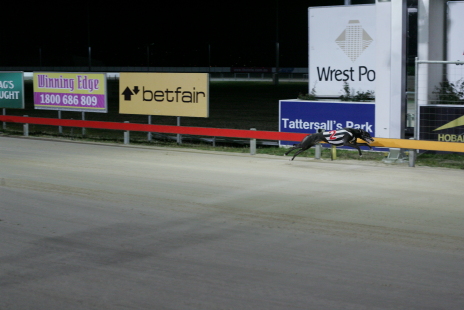 Shanlyn Flossy for veteran trainer Graeme Moate led from box to post in a dominant display that signifies her ability to progress through the grades over the coming months.

Runner up It’s The One was 7 3/4 lengths away with Hellyeah Taz taking third a neck further back.

Punter’s were happy to collect $1.80 on TattsBet to end the night on a positive note.

Mr. Everywhere completed a winning double for Ted Medhurst after he won with Jaguar Pines earlier in the night.

Mr. Everywhere was heavily backed ($1.60f) when having his first start in the State after winning at Bendigo in early June.

Owned in Warrnambool by Mary McDonald this big 37kg pup streeted his opposition by 6 lengths from outsider Rise of Taj with a further 1 1/4 lengths away third Hellyeah Sam.

Earlier in the night, sisters Pauline Green and Pam Taylor made it a family affair double with litter siblings Foxy Moss and Handsome Moss winning much to the chagrin of punters.

Foxy Moss ($17) unwanted in the market after being unplaced in her only eight starts, while Handsome Moss ($7.70) however, at least had a recent 2nd placing to his name and this son of Big Daddy Cool seemed to really relish jumping from the pink.

Both Pauline and Pam passionately enjoy training and caring for their greyhounds and it was a delight to see the joy on their faces after their victories.

Being sent out a prohibitive $1.40 favourite this Buckingham Chuck youngster dwelt slightly and then stumbled off the mat to be a conspicious last early.

This hard railer moved into 4th place past the 340m boxes and was equal leader on the corner turning for home.

He powered away up the straight to win going away by 4 lengths from No Emotion with a further 7 lengths away third Amadeus Wolf in a smart 26.33.

Fair Go looks to be a very strong and striking pup with heaps of potential and again should be followed as he makes his way through the grades.

The second pup No Emotion also looks to be maturing well for Mick Stringer.