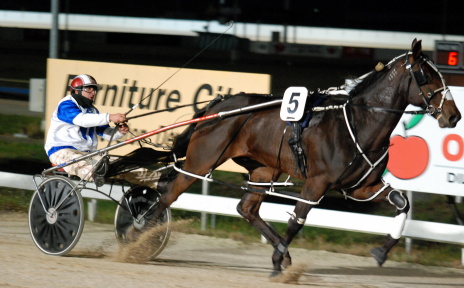 THE nine-race harness meeting at Tattersall’s Park in Hobart tonight (Wednesday) boasts heats of the Big Park Stud Sweepstakes for colts and geldings and for fillies.

The two heats for the colts and geldings boast capacity fields of 11 while the fillies’ division has attracted two heats each of seven runners.

The first colts and geldings heat (Race 1) boasts a talented bunch with four last-start winners and four others that have recorded wins earlier in the season.

Another Jasper (2), Black Tsunami (7), Black Centurian (10) and Lickyalips are last-start winners and all won convincingly while Whodeani (1) won three starts back and Rykov Leis (4) and Divas Delight (8) both won last preparation.

Lickyalips was very impressive in winning the Golden Slipper in Launceston on Easter Sunday (April 8), clocking a mile rate of 1m.58.9s so it would be fair to assume he will start favourite as n one of the other juveniles have broken two minutes.

The second colts and geldings heat (Race 4) will see Laconic Jamane (1) that is unbeaten from two starts, go up against Palmisano (4) that has won twice from three tries, last-start winner Im Royal Tonite (7) and the promising Devendra that has been placed at his past four starts.

The first fillies’ heat (race 3) Looks a match between Really Fayfay and Posh Art while the second heat (Race 8) might belong to last start Launceston winner Carly Seelster (6) that faced the breeze throughout but made light of the task to go on and score by a big margin and untouched.