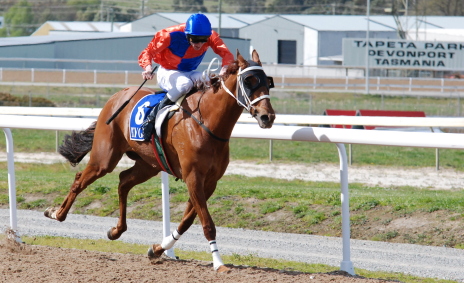 LOS SKYBO (4) ventured to Melbourne at the end of his last campaign and won at Moonee Valley then returned home after failing at Caulfield. Has great first-up record and could be the one to beat in an open race. MERIT’S RESPECT (8) produced an encouraging effort when third at his most recent outing in Hobart at his second start this preparation. Will need some luck in running but looms as one of the main winning chances. CONQUESTADOR (3) has good first-up form and he is reported top be working well on the training track while SANDEEP (2) also is expected to excel at his first run back from a spell. PREDATOR has plenty of speed and is the likely leader and if left alone he will prove hard to beat.

BELLOCQ (5) took a while to win her maiden but she did it in style on this track two weeks ago and would only need to reproduce that form to win again. MORELL (6) also impressed in winning her maiden first-up from a spell three weeks ago and while this is a much tougher ask her times were outstanding when she won. MEMO (3) has drawn awkwardly but has been competitive in this class at her past two outings and WAKEFIELD (2) is a likely improver with a 3kg claiming apprentice aboard. Chances also must be given to HEAD SPINNER (12), GENERAL QUEST (1), DELAGO DELIGHT (7) and ARGENTOGRIS (10).

ALWAYS IN CHARGE (1) could not have been more impressive in winning a maiden/class one over 1600m two weeks ago. Gave the impression he will appreciate more ground so the 2150m should suit. VISUAL EFFECTS (7) also has been looking for this trip, as is the case with SHOWING THE FAITH (2) that rattled home from well back in stronger class race over 1600m three weeks ago. Others with a chance include A LITTLE BIT OF JOY (5), MARY’S CINDER (10), CERTAIN SHINE (3) and A TOUCH OF SHADES (9) warrant respect.

BEAUTIFUL BUNS (6) has been racing consistently against similar opposition of late and gets her chance to return to the winning list here. She has won two of her past three and she should expect to get a cheap lead and she also has a 2kg claiming apprentice in the saddle. TOUGH KISSES (2) has had two runs back from a spell and should be ready to win, while CROWN CONSUL (4) has been a model of consistency this time in with a win and four minor placings from his five starts this preparation. CLAN MCLEOD (7) has been close up at his past two starts ands warrants respect along with CENTENARY DIAMOND (3) that can never be left out in this type of race.