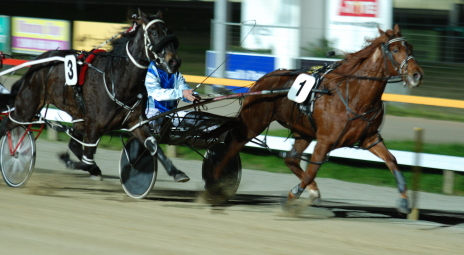 VETERAN harness trainer Paul Hill declared his promising two-year-old filly Fourstarzzzgirl the best juvenile he has ever trained after she scored an impressive win in a fillies’ division heat of the Big Park Stud Sweepstakes over 1609m at Tattersall’s Park in Hobart tonight (Wednesday)..

Fourstarzzzgirl showed brilliant early speed to hold the front from the pole position and then she staved off a determined challenge from Really Fay Fay all the way up the home straight.

It was only the filly’s second start. She debuted with a second to Really Fay Fay two weeks ago but with the aid of an inside draw she was able to turn the tables.

Driver Ricky Duggan was able to steal a couple of slow quarters, emphasized by the mile rate returned of 2m.04.4s.

Fourstarzzzgirl is owned by her breeders Charlie and Connie Beadman who last year offered Hill an opportunity to train their horses at their Old Beach property.

Listen to what trainer Paul Hill had to say about Fourstarzzzgirl’s win – click here.