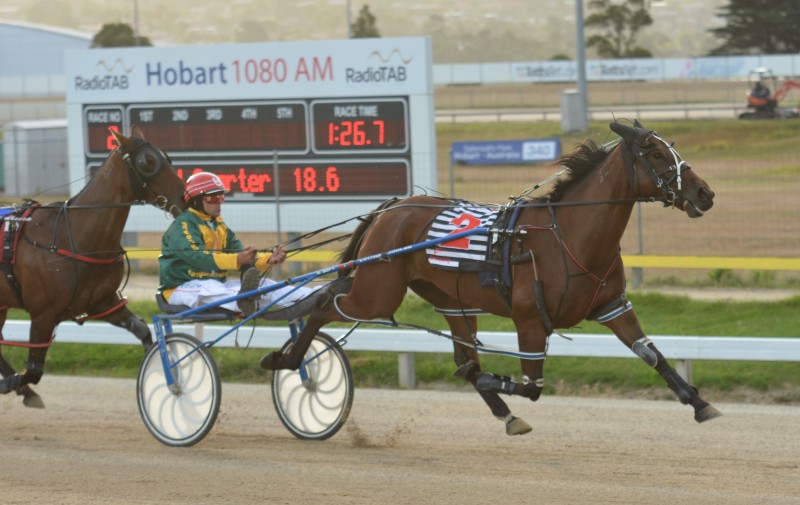 WELL bred pacer Franco Sheffield broke through for an overdue but deserving win when he led throughout to take out a C2-C3 event over 2090 metres at Tattersall’s Park in Hobart on Monday night.

Franco Sheffield won five of eight outings last season but this time in he has taken a while to find the winner’s circle with this his first win from six tries.

He went into the race on the back of consecutive seconds in Hobart last month and it was the most recent second that gave trainer Juanita McKenzie confident going into Monday night’s race.

“I thought his previous run was really good, coming from well back and being taken very wide turning for home yet he kept giving in the run home,” McKenzie said.

“Going into that race I thought his efforts were a shade disappointing compared to what he did last season but sometimes when four-year-olds come back to racing they need a bit of extra time before they hit their straps,” she said.

McKenzie expects the gelding to continue to perform well in whatever he tackles in the coming weeks.

“We will keep doping what we are doing with him and see how he performs and if he measures up well we will look at a couple of feature races otherwise we’ll just keep plodding along in these C4-C5 races,” she said.

Franco Sheffield was purchased as an early a two-year-old in New Zealand by his owners Jamie Cockshutt and Barry Cooper who have about 10 horses in work with various trainers.

McKenzie said Franco Sheffield is likely to have his next start in Hobart in a fortnight.