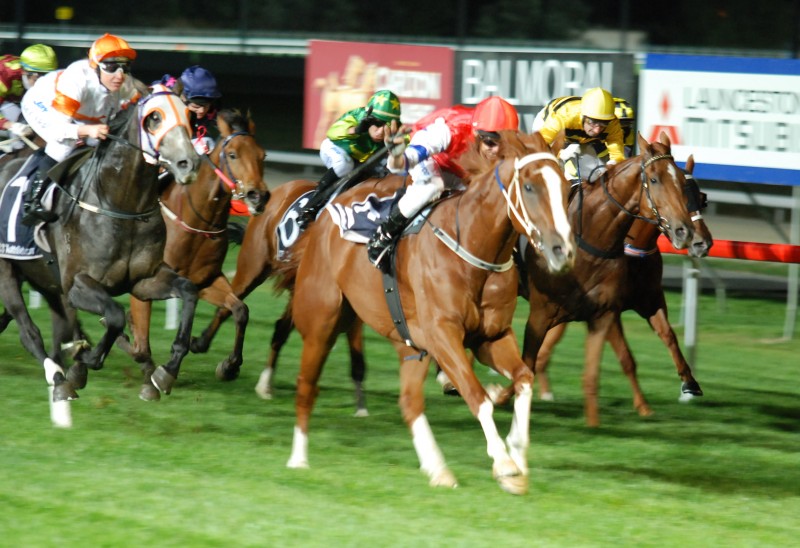 Freddie Two Shoes had been racing over much longer distances in Victoria but the way he tackled the 1200-metre event on the Launceston StrathAyr she looked quite art home over the sprint journey.

The gelding was purchased by his trainer Steve Davis who sold shares to a few friends and family members with the hope of winning a couple of middle distance races with the son of Prussian Lover.

“He had been racing over 1900 metres in Victoria so we thought tonight’s distance might be a bit too short for him,” Davis said.,

“But he had settled in well and freshened up nicely and we’ve got a great result at his first try for us,” he said.

Freddie Two Shoes was recommended to Davis by Caulfield trainer Byron Cozamanis who is a family friend.

“Byron thought he’d be a nice horse for Tasmania, and the way he won tonight, suggests he might have a few more wins in him,” he said.

It was a top ride by Kelvin Sanderson who said the gelding was travelling so well that he felt he had the race in his keeping at the half-way mark.

It was the first of two winners Sanderson but a timely double given he was celebrating his birthday.

Sanderson also guided Esspressardo to victory in the BM68 Handicap over 1600 metres.

Esspressardo came with a well-timed run in the home straight to edge out Tuktoyaktuk and Revenging in a three-way photo-finish.