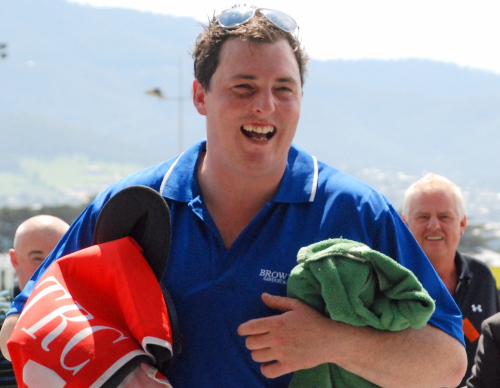 ISHTAR KING, a horse formerly prepared by Lee Freedman, has been making its mark in Tasmania with the gelding’s win in the Ted Cox Memorial (1400m) in Launceston on Thursday his third from as many starts on the Apple Isle.

Ishtar King is prepared by David and Scott Brunton who purchased the King Of Danes-Ishtar gelding at a dispersal sale in Victoria for a bargain basement price.

The gelding was tried by Freedman but didn’t measure up so the horse was sold to race in Singapore but co-trainer Scott Brunton says the horse failed to pass the vet’s inspection.

“He’s more than paid for himself now because two of his wins have been in showcase races,” he said.

The three-year-old has won over $27,000 from his three starts (wins) in Tasmania, which more than covers the costs so far.

“He’s a nice horse and has done a terrific job but while he’s won sprint races I really believe he is a stayer,” Brunton said.

This latest win was just as impressive as his previous two, again coming from well back to overrun his rivals over the final 200 metres.

He hit the line 1-1/4 lengths clear of Maywyn’s Pride with Mr McCartney only a half-neck astern.