French serves up star in the making 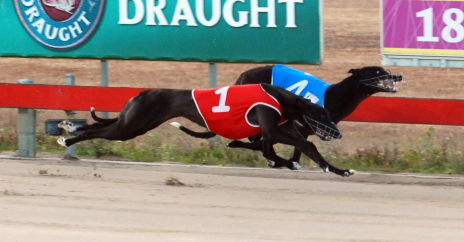 BURNIE restaurateur Craig French has been racing greyhounds for some time without owning a star but that could all be about to change.

French has a talented young pup on his hands in the form of Nooee’s Lad that won his semi-final of the Tattsbet Hobart Maiden Thousand series at Tattersall’s Park in Hobart last night.

After finishing a close-up second to Lily Rocket in a heat, Nooee’s Lad (Knocka Norris-Break Of Dawn) produced a sling-shot start from box eight to be three lengths in front before the rest of the runners were off the green mat.

The Butch Deverell-trained dog maintained his margin to the top turn and went on to score by about four lengths from Tic Tac Thomas with Bain’s Lane a closing third.

Nooee’s Lad went into the race without a win from five starts but his winning time of 26.18 seconds over the 461-metre trip would suggest he will be the one to beat in this week’s final.

Deverell says Nooee’s Lad is a speedy pup with loads of potential.

The Rod Ransley-trained bitch is now unbeaten from two starts and has drawn alongside Nooee’s Lad in the final (box2).

On exposed form and what they each showed in their semi-finals it could all boil down to whichever one gets the advantage at the start will win.

Lily Rocket (Brett Lee-Lily Eve) clocked 26.51 in winning her heat but improved on that by clicking 26.40 in her semi-final.

Top trainer Mick Stringer will be represented in the final by Hindsight that also won his heat and semi-final.

The son of Aston Galilee-Patsy Anne only clocked 26.73 in his heat but he matched Lily Rocket’s time of 26.40 in winning his semi-final over Ocean’s Twelve and Palooka.

He began fairly from box one but mustered speed so quickly he was a length in front after travelling 30 metres.

Street Talk made his way into the final with a convincing win in the first of eight semi-finals but his time was ordinary.

When his time of 27.03 was posted on the semaphore board it had most pundits scratching their heads as the dog didn’t appear to be loafing in the run.

The Loretta Luttrell-trained dog clocked 26.62 in winning his heat and while he did cop a bit of interference approaching the home turn it hardly seemed enough to make the dog struggle to break 27 seconds.

Street Talk has drawn eight in the final which has given him a place chance at best.

The Neville Allison-trained Dilston Tinka won his way into the final with a narrow but convincing win in his semi-final.

But Dilston Tinka wasn’t about to give up and switched to the outside and ran on strongly to score in the last few bounds in a time of 26.73.

He started the second favourite at $4.30 but those who took the lucrative odds would have been giggling when the $1.50 favourite Shanlyn Johnno stumbled and almost fell soon after box rise and that was the end of his chances to make it into the final.

Shanlyn Johnno won his heat in a time of 26.30 and despite drawing unsuitably in box eight his heat win was so decisive punters were prepared to take the risk.

He ran on well to finish fourth but that was hardly consolation for those who invested at the short odds.

The Eileen Thomas-trained Go Sush made it to the semi-final stage by finishing fifth in his heat.

But he made the most of box eight and gave his rivals a galloping lesson on his way to a four-length win over the long odds-on favourite Dream Choice ($1.30) and Take Up Maggie that almost hit the line in unison.

It wouldn’t be a feature race final without a runner from the Ted Medhurst kennel and Direct Sonic staked his claim on the final with a strong win in his semi-final.

Direct Sonic is no slouch and must rate a chance if he begins from box seven in the final.

Lashing Rose will go into the final as one of the most experienced although her only win came in her semi-final last Thursday night.

She was second in her heat behind Direct Sonic but she flew the lids in her semi-final and went on to win as she liked from Volcano and Knocka Lofty.

Direct Sonic has drawn nicely in box seven in the final and would only need to produce her usual god box manners to be very hard to beat.

But if Nooee’s Lad can begin like he did last Thursday night he will take come catching.