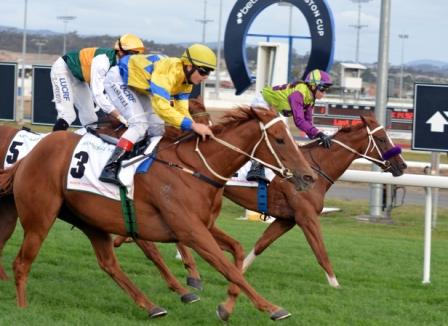 FORMER Tasmanian 2YO Magic Millions winner Frolicked recaptured her best form at The TOTE Racing Centre in Launceston tonight to score a resounding win in a Benchmark 62 Handicap over 1220 metres.

It was the four-year-old mare’s first start for three months but her trainers Graeme McCulloch and David Keating were confident they had ironed out a couple of issues she had and expected her to be very hard to beat.

With in-form apprentice Kyle Maskiell in the saddle, Frolicked settled beyond midfield while a wall of horses vied for the lead including Flash Al Moon, Huss Style, Incat and Caprona Road.

Incat was the first to capitulate while Geegees Soprano searched for a run inside Cuprona Road that had it hemmed in 100 metres out.

Apprentice Hayley McCarthy was able find a gap for Geegees Soprano But while that was eventuating Maskiell had Frolicked fully would up and she rattled home to score by a long neck from Geegees Soprano with Dhanraj a closing third after spending most o the race three-wide with the John Blacker-trained outsider Watch Over Me flashing home from well back to make up the first four.

It was a race in which there were bound to be many hard luck stories.

“We’ve had to change a few things with this filly’s training regime but it has worked and tonight we were quietly confident she would do well,” McCulloch said.

“We raced her in cushion shoes tonight and I think that helped her but she is very god fresh so that’s what we will attempt to do this time in,” he said,’

Frolicked has won four and been placed six times from her 21 starts for almost $100,000 in stakes.