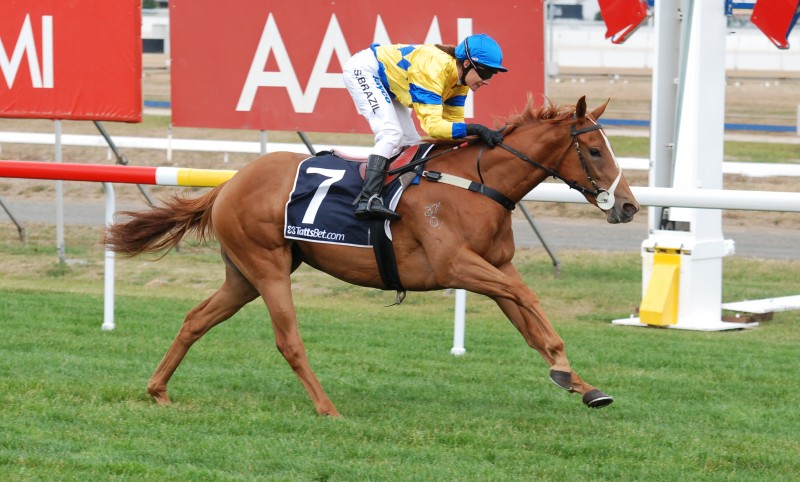 THE win by promising two-year-old Frolicked at the TOTE Racing Centre in Launceston on Wednesday night gave her sire Incumbent a long overdue first winner but it also doubled as an advertisement for the upcoming Tasmanian Magic Millions Yearling sale.

Frolicked was making her debut in the Magic Millions Yearling Sale 2YO Maiden over 1100 metres and while she sat outside of the leader and warm favourite Vigilante for most of the race she defied the tough run to go on and score comfortably from stablemates Geegees Soprano and Geegees Firstword who are both by first-season sire Wordsmith.

Frolicked was bred by her trainer Graeme McCulloch at Grenville Stud at Whitemore from on of his great producing mares Flying Diva.

“I have always been confident this filly would make a name for herself on the racetrack because she possesses all the right stuff to be a good horse,” McCulloch said.

“I am particularly pleased that she has given Incumbent his first winner.”

“He (Incumbent) has had a lot of seconds and probably should have had a few winners on the board by now but all of his progeny are good types and are so easy to work with and that’s going to hold him in good stead as a sire in the years to come,” h said.

A full sister to Frolicked will be offered at the Tasmanian Magic Millions Yearling Sale in Launceston on February 14.

She is almost a replica of Frolicked and she attracted plenty of attention last week when she was paraded at a yearling sale preview at the MeanderValley where five studs took part in a preview arranged by Tasbreeders and Tasracing.

While McCulloch was thrilled with Frolicked’s win he also was delighted with the result of the sale of a yearling he sent to the New Zealand yearling sale.

“I sent this colt to New Zealand through a partnership deal I set up and he developed into such a nice colt that I was told he could fetch as much as $70,000 but he was knocked down for $140,000 so I am rapt with that result.”

“Frolicked winning tonight has pretty much made my day,” he said.