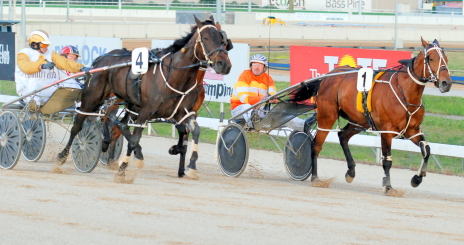 VICTORIAN harness racing mare Mossdale Gabby continued on her winning way in Tasmania with a narrow but game win in the $10,000 Mother Of Pearl at The TOTE Racing Centre in Launceston last Sunday night.

Mossdale Gabby faced the breeze for the last 1200 metres and while her margin over Klebnikova Leis was only a half-head it was still a game win.

With Rohan Hadley in the sulky the mare forged to the front on the homer turn and when Klebnikova Leis moved alongside Mossdale Gabby dug deep to have a margin when they hit the line.

Mossdale Gabby made her Tasmanian debut with a win in Launceston at her previous start.

She is owned and trained by Adam Kelly in Victoria but while she is racing in Tasmania she has been transferred to the care of veteran mentor Max Hadley.

Kelly said he only sent the mare to Tasmania because he thought this year’s feature mares events might not attract the best from interstate because of the prize money being reduced.

“Mossdale Gabby is probably a grade below the best mares in Melbourne,” Kelly said..

“So, with the mares’ races down there (Tasmania) not worth as much as they used to be, I thought the better mares might not head over this year so here we are and so far it’s been worthwhile,” he said.

Mossdale Gabby’s next assignment is the $20,000 George Johnson in Hobart on New Year Day (twilight).