Galibier one of state’s shining lights 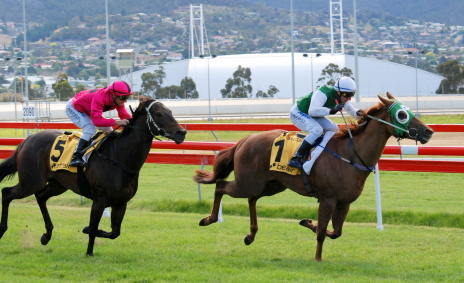 Galibier confirmed his status as one ofTasmania’s brightest prospects when he notched his third win of the season in a strong benchmark 78 over 1100 metres at Tattersall’s Park inHobarton Sunday.

Galibier won at his first two outings this season before finishing a game third in the $90,000 Newmarket Handicap over 1200 metres in Launceston last month.

He made light of his task on Sunday and is likely to be aimed at races over a similar distance in the coming weeks.

It was the second leg of a winning double for jokey Brendon McCoull who also saluted aboard Grand Tycoon in the feature 2YO ace on the card, the Alexandra Plate.

Galibier’s win also gave his trainers David and Scot Brunton a double as they also prepared Hell Strong that scored a game win in the benchmark 68 over 1600 metres.

Team Brunton already have what looks to be an unbeatable lead in the race for the trainer’s premiership with 36-1/2 winners and well clear of their nearest rivals, the Charlie Goggin – Luella Meaburn partnership who have 15-1/2 winners.