Gamblers Rustler makes most of drop back rule 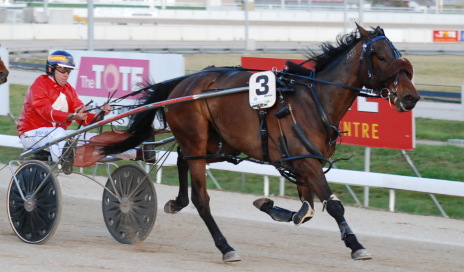 IT took over a year but the way Gambler’s Rustler returned to the harness racing winner’s circle last weekend it would suggest there is still a chance he might yet realise his potential.

Gambler’s Rustler flashed home from well back on the home turn to blouse his rivals in what was one of the most impressive wins on the nine-race card at The TOTE Racing Centre in Launceston last Sunday night.

The gelding had not won in 13 months, during which time he had been moved on from his previous trainer with the owner left to ponder his next move.

“The horse has a lot of ability but I don ‘t know that he tries all the time,” Hillier said.

“When he puts it all together like he did tonight he’s actually a very good horse.”

“He had a bit of a go tonight and showed what he can do. One day, when he’s in the mood, he’ll probably knock off some good horses,” he said.

Gamblers Rustler is a seven-year-old by Rustler Hanover from the Safely Kept mare Allsorosie that was bred by Noel and Marlene Salter at Broadmarsh.

When in the care of master trainer Paul Williams he only had one start at two for a second but at three he won six of his first seven starts with the minor placing a second to Make A Memory in the 3YO Prince Of Pace in Hobart.

The gelding finished down the track in the Tasmanian and Australian Derbies but he gradually won his way to open class.

However his form went south after he won a race in Hobart in August last year.

The owner Derek Burdon sent the gelding to Hillier with the hope that a change of environment might spark the gelding back into form.

This was Gambler Rustler’s seventh start for Hillier and while it was his first win he hadn’t been too far away at most of his other outings for his new trainer.

Having not won for so long the gelding was able to make the most of the drop-back rule making him eligible for the C4-C6 race and that was enough to convince punters to get on.

Hillier allowed Gamblers Rustler to settle near the rear from outside second row draw but he was still near the rear when the field swung for home.

Hillier had to ease his charge six-wide in the home straight but when he called on the gelding to extend he rattled home and hit the line with 3.6 metres to spare over Cardinal Seth while Billabong Bertie was 1.4 metres away third.

“Realistically he had 100 yards on them so that’s how he should have won.”

“He has to be driven cold for him to do his best,” Hillier said.