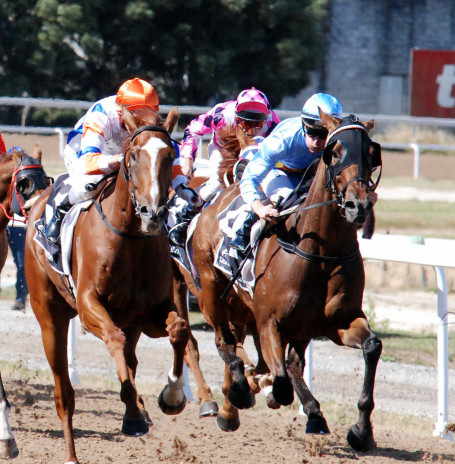 IF Catwen Boy can emerge triumphant in the $100,000 Simon’s Design Centre Devonport Cup over 1880 metres on Wednesday trainer Mark Ganderton will have achieved his ultimate goal.

While many owners and trainers aroundAustraliadream of capturing a Cox Plate or a Melbourne Cup, Ganderton has had his eyes on just one prize since he first started messing about with horses – his home town cup.

Ganderton has come close with three minor placings from four serious tries but this year his stable star Catwen Boy appears more than ready for the task.

Catwen Boy has been impressive this preparation that started with an eye-catching sixth in the Newmarket Handicap and followed by a luckless second in an open handicap on his home track at Spreyton.

But neither was more impressive than his win in the Sheffield Cup over 1650 metres on Boxing Day.

The gelding was a star juvenile that contested most of the feature two and three-year-old races but at the end of last season he required an operation to remove a number of bone chips from both front knee joints.

The surgery was hailed successful and from what he has showed this time in he is on the way to delivering to his trainer the prize of all prizes on Wednesday afternoon.

What stands in their way is a horse by the name of The Cleaner who has the potential to make a clean sweep of the major cups with the AAMI Hobart and Launceston Cups significant targets of his campaign.

The Cleaner, prepared at Longford by Mick Burles, has started twice this season for two very impressive wins. The first was in the weight-for-age Kevin Sharkie over 1600 metres inHobartin late December and the most recent in a quality handicap over the same distance in Launceston last Wednesday night.

Victorian stayer Fieldmaster is back in the state for another crack at the Hobart-Launceston Cups double and he kicks off his campaign in the Devonport Cup.

The Patrick Payne-trained gelding’s form is woeful of late but the trainer has specifically targetedTasmaniafor the gelded son of Black Minnaloushe.

Last season’s Thousand Guineas winner Gee Gees La Quita earned her place in the race by wining the Golden Mile over 1650 metres at Spreyton in early December and at her latest outing she was a luckless sixth to Catwen Boy in the Sheffield Cup.

The gallant grey Jakcorijim was game in defeat in the Sheffield Cup when beaten a long neck by Catwen Boy after being hailed the winner 100 metres out.

This year’s race boasts plenty of horses with early speed, which has the potential to bring about The Cleaner’s undoing.

Makes Cents knows only one thing and that’s flat out and Zellarcy also is known for his early brilliance and ability to set a fast pace in his races.

Add to the mix Jay Bees Gee Gee that also is a bold front-running type and we have the makings of a hotly contested race.

Listen to what trainer Mark Ganderton told Tasracing’s Peter Staples in an interview earlier this week – click here for the audio file.