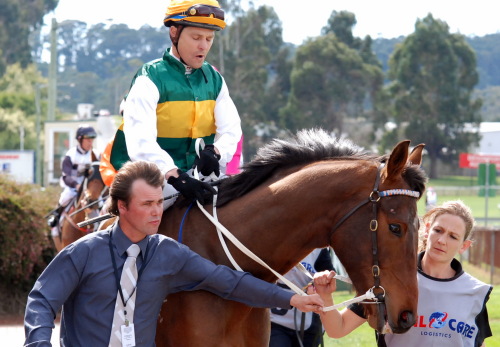 SPREYTON trainer Mark Ganderton celebrated his best ever day at the races on his home track today (Sunday) where he prepared a treble.

Ganderton took four to the races and saddled up the first three winners on the eight-event card.

Man From Mars opened the stable’s account with a bold front-running display in a 3YO and upward maiden over 1175 metres.

With top rider Stephen Maskiell in the saddle the gelding cruised to the lead early and when the jockey called for the supreme effort in the home straight by Flash Kingdom the son of West Quest had the answer and hung on to score narrowly.

Underrated Victorian apprentice Talia Rodder notched her first winner In Tasmania when she partnered Ganderton’s Hindu Lion to a stirring victory in the 0-66 handicap over 1175 metres.

Under instructions from Ganderton, Rodder allowed Hindu Lion to settle near the rear while the leaders set a cracking pace.

When she let the seven-year-old go in the home straight she powered home to score by four lengths.

Unfortunately Hindu Lion bled after the race and as it was the second time he has been retired from racing.

Maskiell made it a double when he scored aboard Ganderton’s first starter Dancing Fox.

The three-year-old son of Foxhound settled near the rear of the field and looked to be struggling 400mk out but he appeared to grab the bit and chase hard nearing the home turn.

Dancing Fox went past the leaders like a good horse in the home straight and went on to score comfortably from Elfin Cash with Minsky Music a distant third.

Listen to what trainer Mark Ganderton had to say about his first treble – click here .