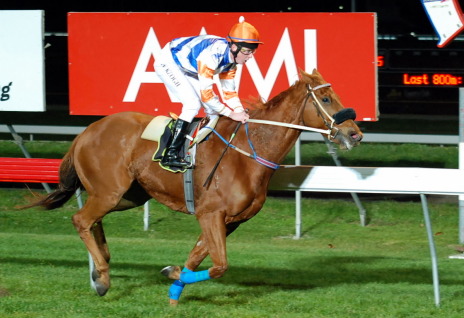 Spreyton trainer Mark Ganderton has had no end of trouble getting Gea Force to the races ever since the gelding was a two-year-old.

But a patient attitude and through help from his farrier Kel Hamilton Gea Force may have turned the corner.

Gea Force scored a big win on his home track last Sunday in a race that boasted only four runners and in which he was sent out the rank outsider at $10.80.

But instead of living up to his starting price he instead won like an odds-on favourite.

With Shannon Brazil aboard, Gea Force camped just off the pace and courtesy of a saloon passage run along the rails in the home straight he powered to the line to score by 1-1/2 lengths from the odds-on favourite Getitdone ($1.40) with Tough At Heart ($6.80) 2-1/4 lengths away third.

Ganderton said Gea Force has had his share of problems.

“He had one run as a two-year-old and didn’t race again until he was four – he was always sore,” Ganderton said.

“I can’t remember how many trips he had to the vet.”

“We had X-rays taken of his knees and cannon bones but we couldn’t get to the bottom of what was wrong.”

“All they could tell me was to keep putting him out, so I did.”

The trainer admitted the horse still has a slight issue with his knees but that his main problem these days is his feet.

“He has one really bad foot and our farrier Kel Hamilton has worked on him and done a great job,” Ganderton said.

If Gea Force continues to improve Ganderton will target races such as the Brighton Cup in January.

“The horse normally takes four or five runs to get to his peak so he’ll race right through to the Brighton Cup,” he said.