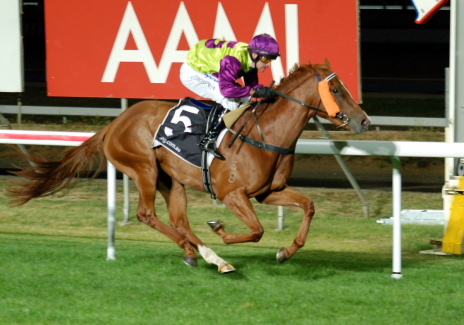 TALENTED three-year-old filly Gee Gee’s La Quita will be aimed at the Listed PFD Food Services Tasmanian Oaks after scoring a brilliant all-the-way win in the Aceland Thousand Guineas over 1600 metres at The TOTE Racing Centre in Launceston on Wednesday night.

The Stuart Gandy-trained filly was taken straight to the front by NSW jockey Robert Thompson who was a late replacement for Lee Smith who was stood down by stewards on the day.

Thompson allowed Gee Gee’s La Quita to roll out of the gates and when nothing was keen to lead he followed trainer Gandy’s instructions by taking control of the race.

“When nothing took me on for the first half of the race my filly didn’t have to do any extra work, in fact she went to the half-mile (800m) with her ears pricked,” Thompson said.

“I thought she was very strong to the line ands gave me the impression she will appreciate more ground,” he said.

Gee Gee’s La Quita staved off all challengers in the straight and went on to defeat the favourite Anelene by 2-1/2 lengths with Oxy Angel only a half-neck astern and just in advance of All Day Sundae.

The filly is owned and raced by Paul and Elizabeth Geard who are the state’s most prominent owners.