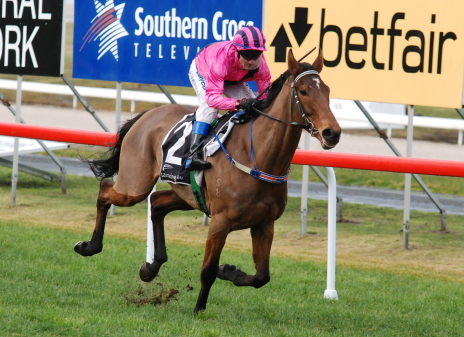 LIGHTLY raced four-year-old Deux Foix made quite an impact at The TOTE Racing Centre in Launceston last Sunday where the four-year-old gelding scored an effortless five-length win in a maiden over 1400 metres. It was only his second start but he delivered the win like a seasoned professional. With David Pires aboard, Deux Foix travelled well just behind the speed set by She’ll Be Savvy and was right at home in the very soft ground. The Stuart Gandy-trained gelding was bred by Armidale Stud, being by Savoire Vivre from Xanex (x Polish Laughter). When Pires called on the four-year-old for the big effort at the top of the straight he gave his rivals the slip and if anything was extending his lead when he hit the line five lengths clear of Gee Gee Horsepower that ran on well from midfield while the well-backed Rosemount Dara that raced outside of the leader to the home turn battled on gamely to grab third ahead of Barilla Bay that raced no better than three-w-de the entire race. Listen to what trainer Stuart Gandy had to say about Deux Foix’s maiden win – click here .