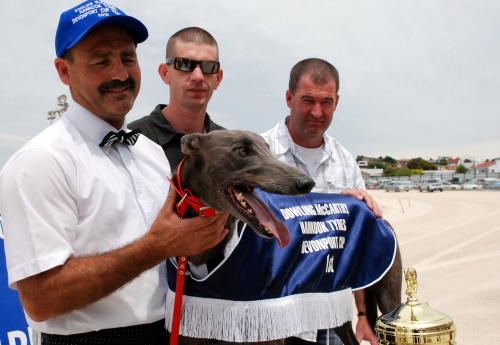 VICTOIRIAN trainer Darren McDonald has won Group races all over Australia with the exception of Tasmania but that anomaly was addressed at Devonport last week when his smart dog Gardam Prince won the $37,500 Group 3 Devonport Cup.

Gardam Prince (Black Enforcer-She’s Travelling) proved his quality when he shrugged off local star Topline Doovee on the home turn to eventually go on and score a comfortable win over outsider Rulla Shaw with Topline Doovee a close-up third.

McDonald almost heaved a sigh of relief when his U-turn track specialist gave his rivals a galloping lesson.

“I’ve been trying fore many years to win a big race here in Tassie and we’ve finally broken through,” McDonald said.

“I’m rapt to do it with this dog because I reckon he’s got a huge future and he’s without a doubt the best one-turn dog in Australia,” he said.

McDonald has been a regular supporter of Tasmanian greyhound racing over the years but Tassie Group success had avoided him.

Even the great Brett Lee couldn’t break the drought, running second to Top Shiraz in the 2000 Hobart Thousand.

“It’s not a Hobart Thousand but I’ll take it,” McDonald said.

Gardam Prince will be set for a few of the country cups in Victoria but McDonald already is eying off this year’s Hobart Thousand in December.